With the motorad 83c stat the gauge was hovering from about half on the gauge to the upper white line. I'd notice it oscillating between half and the upper line (marked 210 on some cars) every minute or so even at steady state 50mph driving. Water bridge temps were hovering around 215f when at the upper white mark. Then one day sitting in a drive through in ~80f weather with the a/c on the temp got about a needles width above the upper white mark. When pulling back out onto the road with moderate throttle the car pinged some, so backed off the throttle. Once moving it cooled back down to just around the upper white mark again.

At this point I wondered if that motorad stat wasn't working well, so I installed a new wahler 83c stat. It hasn't gotten quite as hot as it did when it pinged, but it still is hovering from halfway to the upper mark. Temps on the water bridge around 215-220. I put on a new fan clutch because the old one definitely felt like it had leaked some fluid over the years, but that didn't change anything with the temps. Driving 70mph down the road even the temp was still sitting pretty high.

Today I decided to put the old 75c wahler stat back in to make sure I'm not going crazy here. Sure enough the needle won't quite leave the first white line now. Water bridge temps are sitting in the mid to upper 180s. Even letting it idle in the driveway (mid 90s ambient) with the a/c on the highest water bridge temp I could see was 192. So that tells me that something is up with both the 83c wahler and motorad stats as it seems like the car's cooling system has plenty of capacity to dissipate heat otherwise.

I threw both of the 83c stats in a pot of water on the stove. The motorrad cracks open right at 180f and was fully open around 200f. The wahler waited until 182 or so to crack open and was also fully open right around 200f. I had already put the 75c stat back in the car at this point, so I wasn't able to compare the amount the rear section moved to seal off the bypass.

All I can think is that the 83c stats aren't sealing off the bypass somehow. Again that seal is new and doesn't seem to be a problem with the old 75c wahler. I'd expect to see the water temp running closer to the 200f that the stat is fully opened at then and not getting up to 230. This makes me wonder if that's the problem with my tan 86.5 project car overheating too.

Anyone have any thoughts or notice anything weird with new thermostats lately? 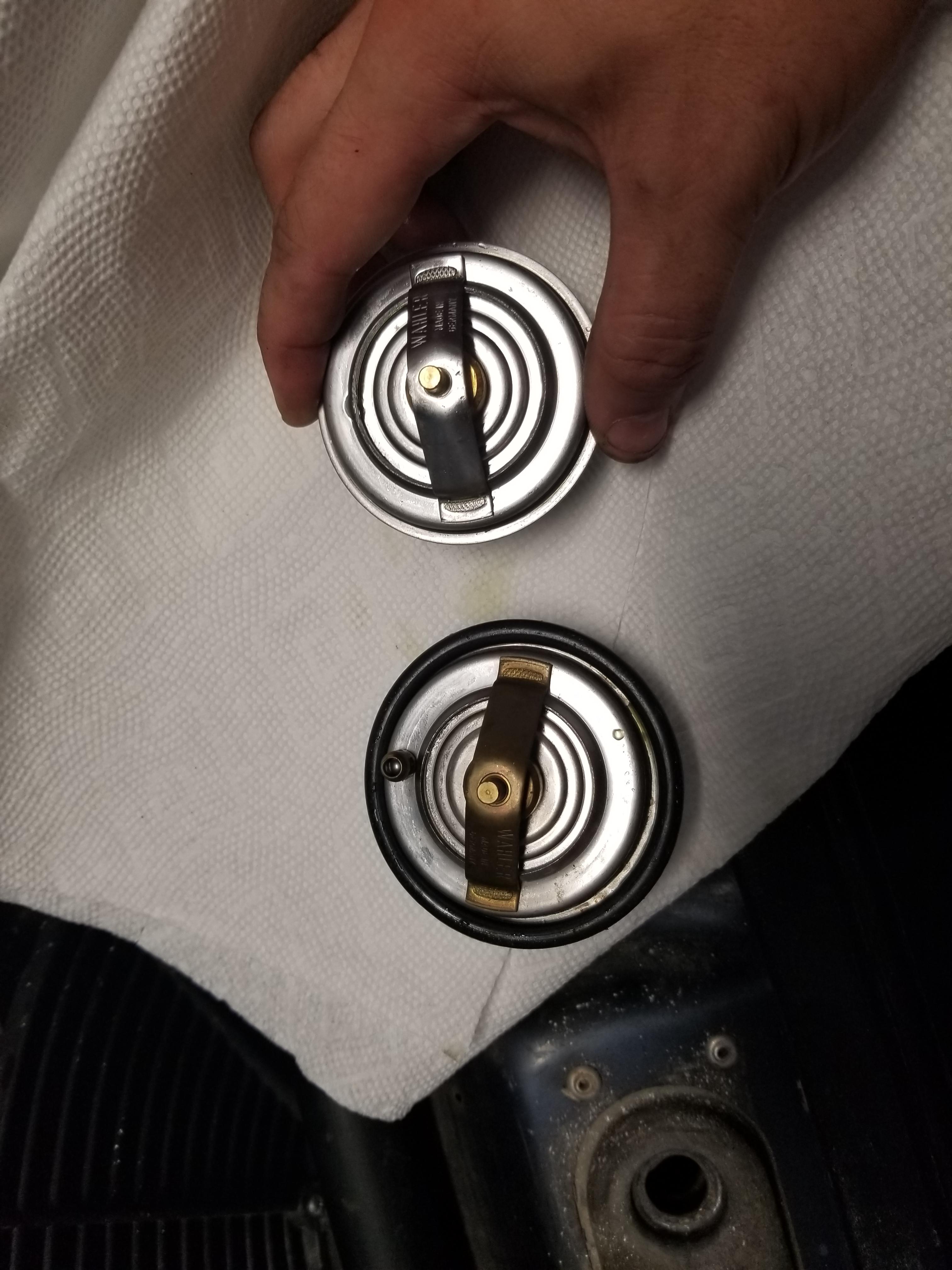 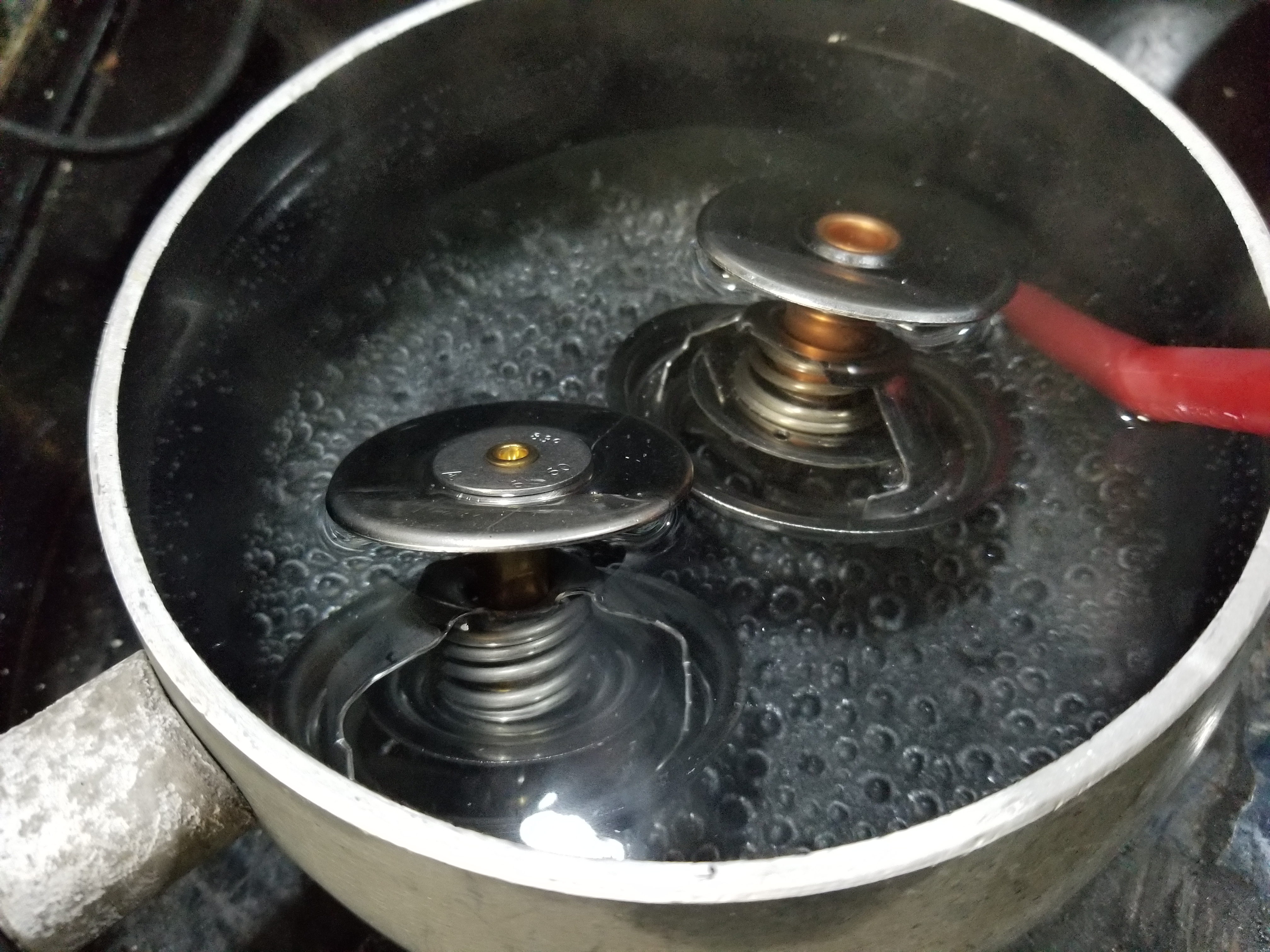 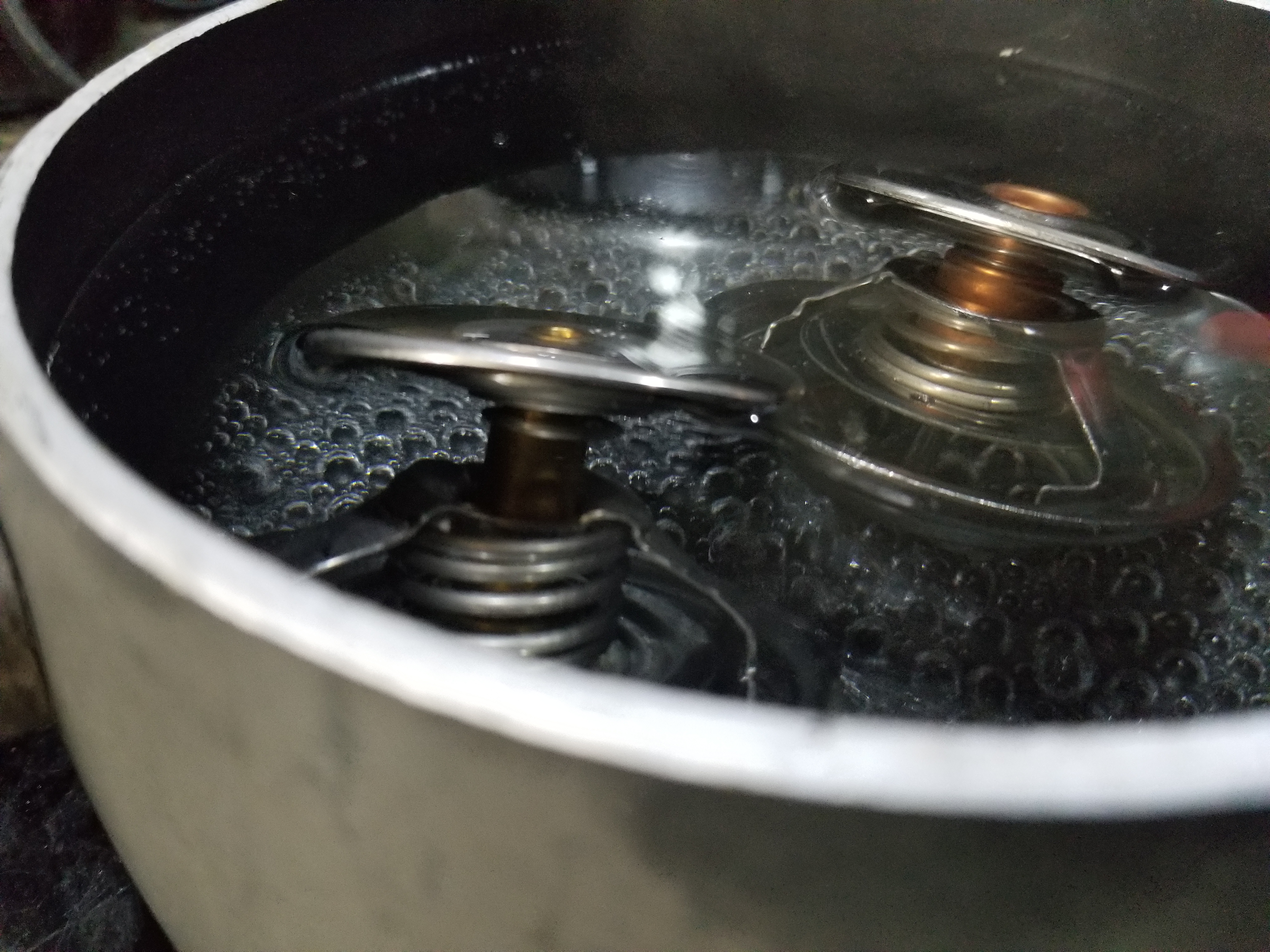 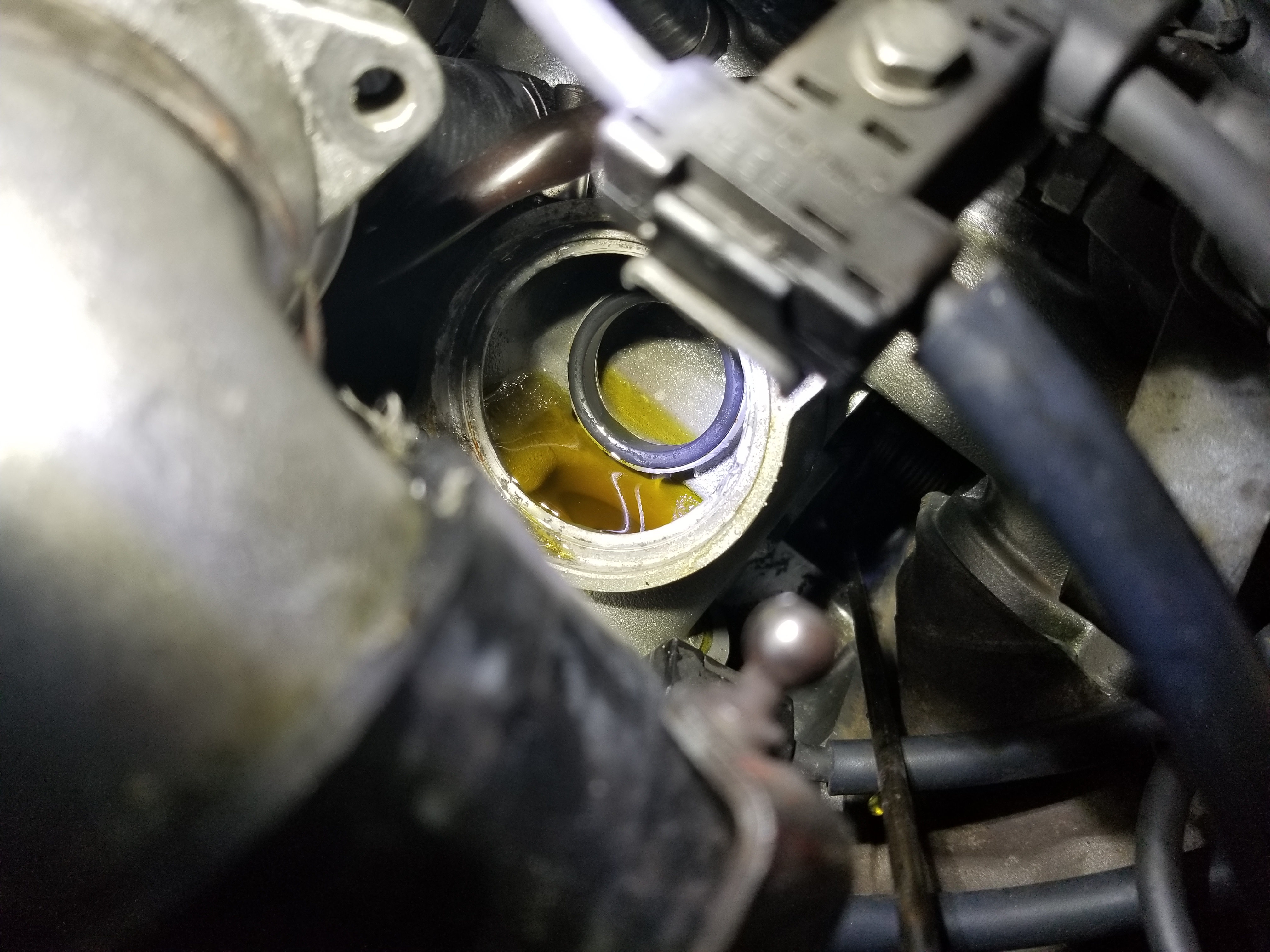 captainOCD wrote: ↑Mon Jul 05, 2021 11:12 pm Anyone have any thoughts or notice anything weird with new thermostats lately?

Short story: installed a MotorRad and had to warranty R&R with a Wahler about 10 hours of operation later. This was about two years ago. My testing told me that the MotorRad opened inconsistently and the opening was smaller when it did open.

iMO, the thermostat should be fully open by 195°F. But, when you’re boiling water on the stove you can’t control the speed of temperature change.

I wonder if you got a counterfeit Wahler?
Hanlon’s Razor: Never attribute to malice that which is adequately explained by stupidity.
Heinlein’s Corollary: Never underestimate the power of human stupidity.
The Reddit Conjecture: Sufficiently advanced stupidity is indistinguishable from malice.
Worf’s Razor: Never attribute to stupidity that which is adequately explained by laziness.
Worf’s Identity: Sufficiently advanced laziness is indistinguishable from stupidity
Worf's Law: Once you've mitigated risk from stupidity and laziness in your endeavors, failure is usually the result of insufficient imagination.

It just is really strange that it appears to operate properly on the stove, but behaves so odd in the car, especially 2 different thermostats.
-Matt

The procedure here was bringing the stats up to a boil in water, measuring at 210 then measuring the remaining temps as the water cooled slowly.  One thing worth noting is that the wahler stats seem to be much slower to react, both opening and closing than the motorad.  The distance measured is the mating surface of the thermostat where it sits against the water bridge to the mating surface of the rear disc where it seals to the bypass seal.

The tan car also has a new bypass seal.  I measured the distance from it to the edge of the water bridge to be just a touch under 33mm.  So unless the distance is unusually larger in my blue car, you'd think they should be completed sealed off when the stat is fully opened and certainly shouldn't be getting up into the 220s and 230s.
-Matt

captainOCD wrote: ↑Tue Jul 06, 2021 6:55 pm So unless the distance is unusually larger in my blue car, you'd think they should be completed sealed off when the stat is fully opened and certainly shouldn't be getting up into the 220s and 230s.

The most obvious explanation for any thermostat not closing against the inner seal is the outer seal being on the wrong side of the thermostat.

If we assume that there's no measurement noise in your table data, then ...

Take a look at the actual opening diameter and the "throw" of the Motorad versus the Wahler. As above, the Motorad I replaced couldn't flow as much water when fully open as the Wahler (and this Motorad was "sticky" when testing in water.)

At operating temperature on a hot day, cruising at 90 mph, the engine core temperature should be the same with an 83c thermostat as with a 75c thermostat. Either will flow the same volume of water from the radiator once fully open assuming the only difference is the opening temperature.

IIRC you've been chasing this for a while right? Posts in another thread too. I asked about water pump?
Hanlon’s Razor: Never attribute to malice that which is adequately explained by stupidity.
Heinlein’s Corollary: Never underestimate the power of human stupidity.
The Reddit Conjecture: Sufficiently advanced stupidity is indistinguishable from malice.
Worf’s Razor: Never attribute to stupidity that which is adequately explained by laziness.
Worf’s Identity: Sufficiently advanced laziness is indistinguishable from stupidity
Worf's Law: Once you've mitigated risk from stupidity and laziness in your endeavors, failure is usually the result of insufficient imagination.

I was going to work on tracking down if the tan car had decent water flow today, but my 3 year old fuel hoses there decided they identify as a collinder now.
-Matt

Back in 2010 (I think), I decided to put a 75d thermostat in my car.
The idea was to lower the engine operating temperature.
I tought back then that this might be a good thing.
(BTW, I don't remember what was the gauge reading temperature with the previous 83d thermostat)

I then started to asked myself it this was a good thing to run that cool and asked the question here.
The answers from few members was "No".
I remember reading that the 83d thermostat provides the ideal temperature for the best engine efficiency.
I then decided to go back with a 83d thermostat.

And since this new 83d thermostat is in place, the gauge reading is always reading half a needle below the second white line on the highway and right on the second white line in town.
I mesured few times the temperature at the water bridge with my IR gun and get from 90 to 100d C on the upper hose side (coolant to radiator). Even a bit higher than that on real warm days.
And about 12-14 degree less at the water bridge on the thermostat side (coolant from radiator to water bridge).

And BTW, with the 75d thermostat, I believe the car was running richer too...
it's been a while, but quite sure the car was smelling more (burned gas)...
Easy to notice in the garage...

I did try to double check that my ir temp gun is reading accurately too. Not very scientific, but my Durango has the factory temp sensor on the manifold and a Dakota digital fan controller in the upper hose. With both of those holding right at 195 (as read by obd and fan controller) I measured 195 exactly on the upper hose sender body, and a few degrees lower on the manifold sender. So I don't think the higher temps were a misreading here. 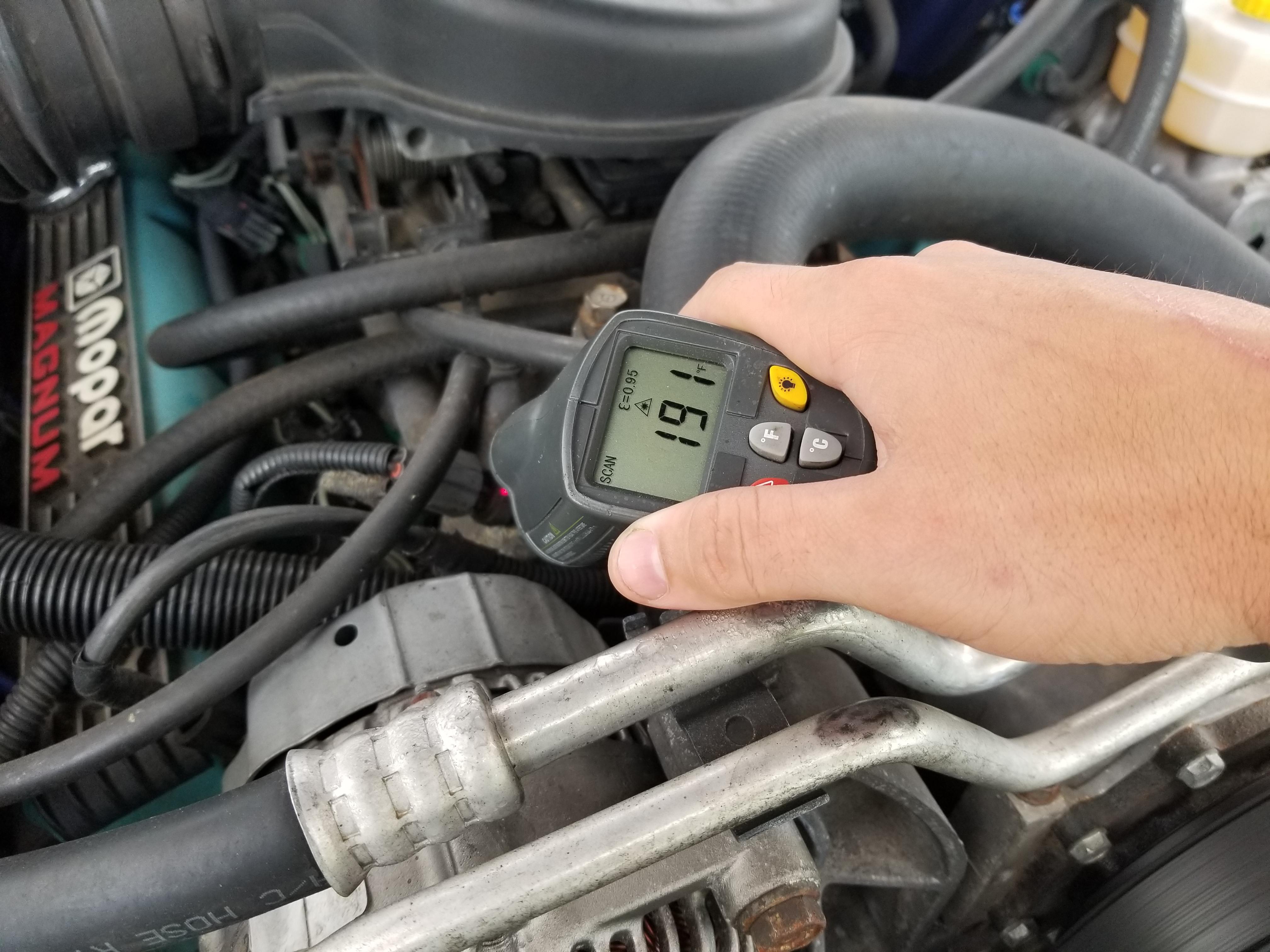 Just to make sure, you're taking the temperature on the water bridge itself.
Not on the hose. Right?

Rust marks on t-stat show where rust bubbles have burst. Gaps may be from removal but bumps and hard rubber mean it did not seal well.

89_black_tstat.jpg
You do not have the required permissions to view the files attached to this post.